The medical directive says under what circumstances the grantor, or the medical director, wants medical treatment to be denied. When my father died, he gave a medical directive to my sister. He had a severe stroke and could no longer feed himself and was given a feeding tube. Unfortunately, in his medical directive, he didn’t instruct my sister as to the conditions under which he wanted heroic treatments to be denied. Although my sister had the power to deny treatment for him, he had failed to state his treatment preferences in this scenario. My sister did not know what kind of care he wanted. This is why it’s important that your preferences be stated, so that your children know what you want, and don’t have to squabble over your health care. In my father’s case, my brother objected to the denial of heroic efforts. This resulted in hard feelings between my brother, my sister, and me concerning my father’s treatment. A medical directive is extremely useful because you want to make these decisions beforehand so that you’re not forcing your loved ones into making the tough decisions for you. It is important that you think through the best case and worst-case scenarios if you’re in a medical situation and try to the best of your ability to let the family know what you’d really like to happen.

In Virginia, you can pass title to real estate without a will. However, there are still several benefits to having a will. For instance, in my own case, when my father died, he had a small farm. My brother, my sister and I did not agree on how that farm should be handled. My father had a will, but unfortunately, he didn’t have the power of sale set in the will. This caused a lot of conflict. If you have heirs, it is a good idea to have a will because then you can put the power of sale in the will. If the heirs don’t agree as to how the property should be handled, then the executor can simply sell the property and make a distribution to the children or to the heirs. That’s a great utility. Similarly, many clients have blended families made up of children from other relationships. In that case, you might want to leave property to each heir, but obviously it would be easier if an executor were handling that kind of delicate situation, where you have stepchildren involved. Also, lending institutions will not accept communication with the heirs unless a probate estate has been created. Thus, in many instances, it would make sense for you to have a living trust so that the fiduciary can communicate with the lending institution without the necessity of court intervention. I couldn’t tell you the number of people who have come to my office, who had to probate a will for no reason other than to deal with the lender. All of that could have been avoided by putting the property into a living trust giving your heirs a continuity of ownership.

Even if you think you don’t have assets, you probably still have sentimental items that your family members might fight over. For example, say I want my golf clubs to go to my son. In the eyes of the IRS, those golf clubs may be worthless. If you don’t specify your intentions concerning the disposition of an asset in a will or some sort of official messaging, then the family may fight over that asset. I have seen situations where someone dies and items from their house disappear because family members come in and grab these items before their other family members can get there. It would be nice, even in simple situations, to specify, “look, I want my son to have my golf clubs. I want my daughter to have my engagement ring” and so forth.

There are benefits to having your assets, properties, second homes or farms put in a trust rather than in your personal name. Trusts allow for these large assets to be efficiently administered so that the trustee could sell and administer those assets without entanglement in the courts. The other benefit of a trust would be that there’s asset protection for the beneficiaries of the trust. So, most trusts have a spendthrift provision in them, and those spendthrift provisions allow you to pass assets to your children, but not your children’s creditors. This can be important because unfortunately some of your children may be doing well but one or two of them may have financial problems. A trust would allow the trustor to pass assets to their children, even if those children had, or were, being pursued by their creditors. A trust would also allow you to provide tax benefits to your children or even grandchildren. It also allows you to provide for the needs of children who have disabilities.

I do a lot of bankruptcies. Even people in bankruptcy who believe they don’t have any assets ought to have a general power of attorney, a medical directive, and a simple will. I think everyone should have those things because they are beneficial and necessary. We all have loved ones. We all have situations where we could be harmed or die, and if these situations arise, it is nice knowing that our family members will know exactly what to do. They will know exactly the circumstances of whether we want medical care or not. What we’re trying to do is make everyone’s lives simpler in a difficult time. I can’t stress this service enough, and we can offer payment plans for all these services. 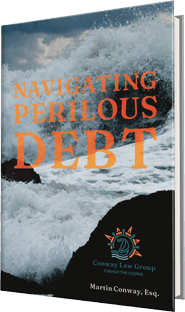 Get Your FREE Copy of
Navigating Perilous Debt